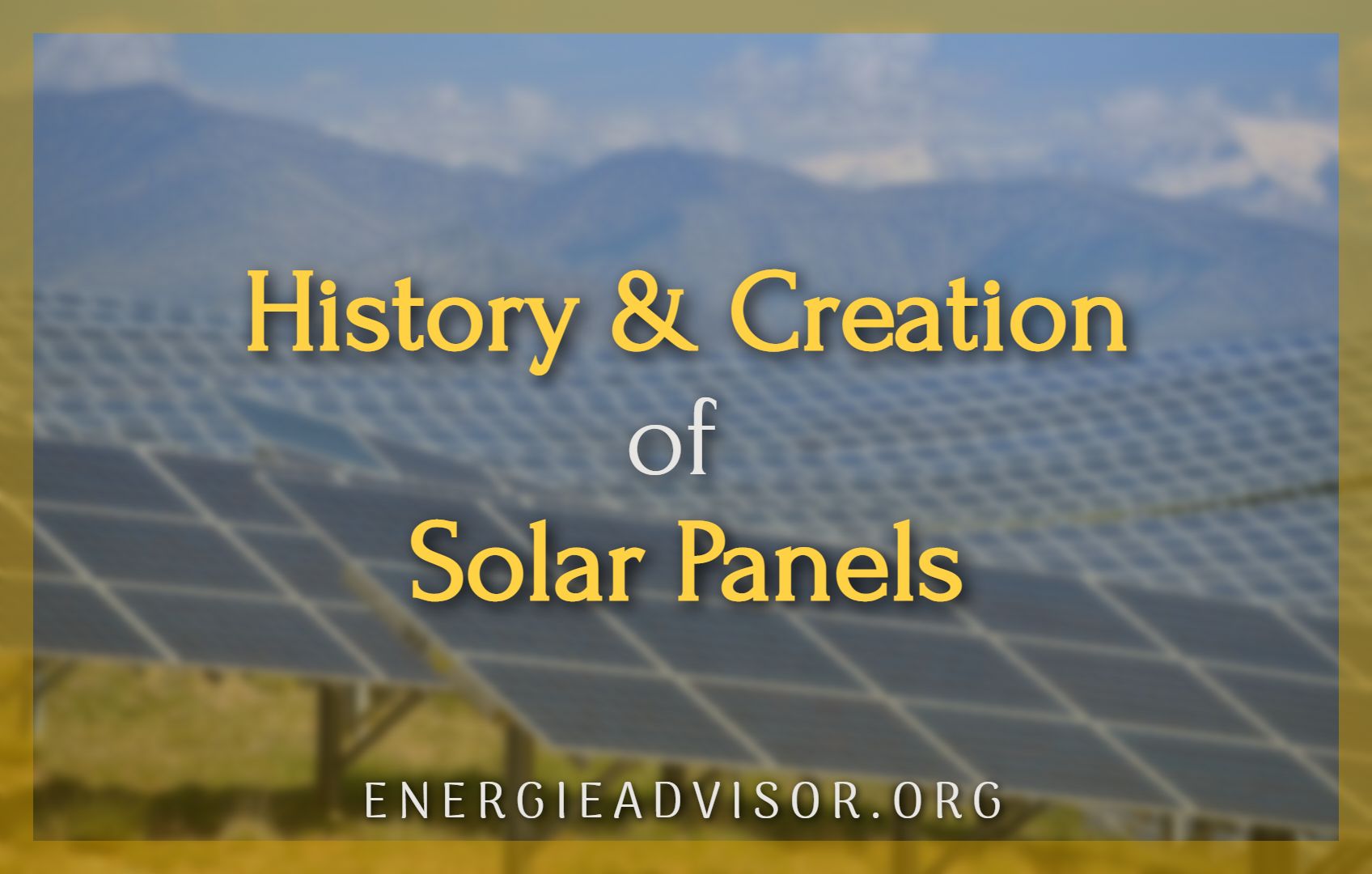 It’s indisputable that the invention of solar cells changed the course of history. With solar technology, we were given an alternative to fossil fuels and a chance to make up with our planet, to redeem ourselves for all the bad we did in the past.

If you would like to know more about this fascinating story of progress and innovation, stay with us and get to know the real solar panel’s history. 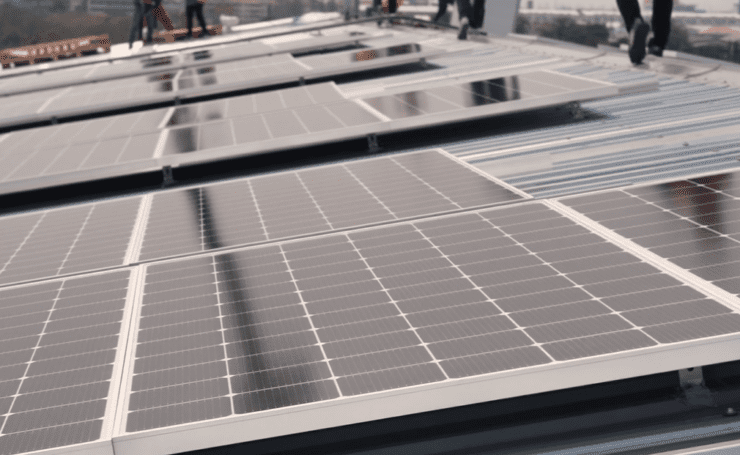 If you think about it, solar energy exists as long as the planet Earth. And people have always depended on it. In the early centuries, everyday life was absolutely dictated by the sun and its movement. But the direct usage of solar power is tied to the time when people began using sun rays to start the fire for the purpose of cooking, with the help of magnifying glass.

Then, in ancient times, there were sunrooms where the solar energy was captured because of its natural warmth. We are talking about rooms that were south-oriented and part of the Roman bathhouses. This concept is still quite popular among people who live in colder climates.

There’s even a legend according to which Greeks put the Roman wooden ship on fire only with the help of bronze shields on which they reflected the sun’s light. Now, even though that’s only a story, in the 1970s, an experiment was conducted by the Greek navy that proved this to be possible.

When Were Solar Panels Invented?

First, in 1839, Edmond Becquerel, the French physicist, was experimenting with a cell made of metal electrodes, and he discovered the photovoltaic effect  – when exposed to light, the cell produced more electricity. Then, in 1873, another physicist established that selenium could be a photoconductor.

And finally, in 1876, Richard Evans Day and William Grylls Adams connected these two dots and came to a conclusion that the photovoltaic principle applied on selenium, when exposed to light, can actually create electricity.

Around five decades after that, Charles Fritz, an American inventor, designed the first-ever selenium solar cell. So if you were wondering who created solar panels and who is considered to be the father of solar cells, Charles Fritz is the name. His invention was the precursor of solar panels we know and use today. 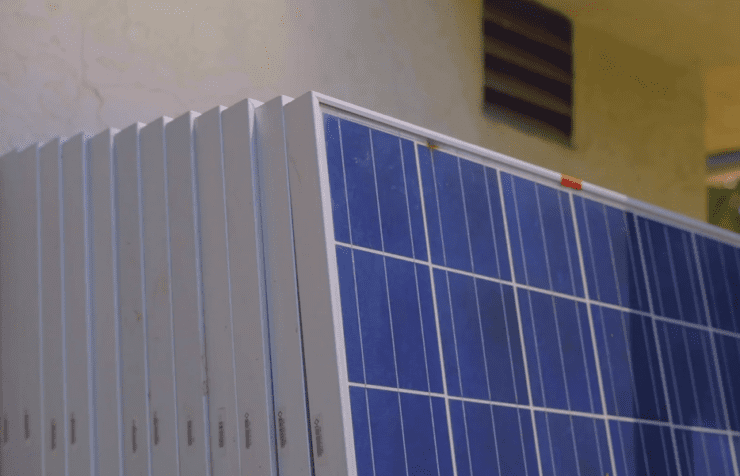 When it comes to the world actually knowing about solar energy and its benefits, the famous Albert Einstein played a huge role in that. In 1905 this scientist published a paper where he explained how light could create energy and what is a photoelectric effect. This paper of his made the world accept this new invention.

Then, again 50 years later, three scientists – Calvin Fuller, Daryl Chapin and Gerald Pearson, who all were working in Bell Labs, made a huge step forward by designing the silicon solar cell we use today in solar panels. The benefits were huge – silicon based cells were far more effective and very available as a natural resource.

After that, the ball continued to roll. During the 1960s, solar cells were used for creating some parts of spacecraft, like for the satellite Vanguard I, Sputnik 3, Vanguard II, and Explorer III. But just a few years later, more precisely in 1964, NASA launched a satellite that was completely based on an array of 470-watt photovoltaic solar panels.

During the 1970s, when there was an oil shortage and a great economic crisis in the US, people became aware they needed to continue with innovations and make themselves again independent from foreign energy resources.

At that time, President Carter decided to install solar panels in the White House, which was a clear statement of support for clean energy. That was the breaking point that made the citizens of the US interested in solar technology in general and in solar panels for personal usage.

But, in the beginning, during several decades even, the cost of solar panels was extremely high, so not many people were able to afford this technology. With time, the price started to drop down, and the efficiency of new and improved solar systems was becoming better and better. So solar panels transformed into a realistic possibility for everyday people and the biggest change in that direction happened in the last several years.

Price and Efficiency of Solar Panels 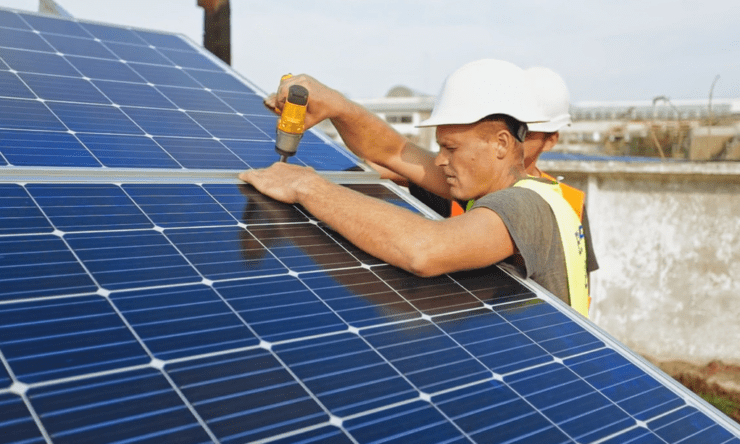 As we mentioned, the price and efficiency of solar panels changed dramatically over the years. At the moment when it all started, so in the time when Becquerel experimented with metal cells, solar panels were maybe 1 percent efficient. And the cost of electricity was around $300 per watt. At that moment, the price of electricity based on coal, for instance, was $3 per watt.

When the Bell Lab scientist discovered silicon solar cells, the solar panel efficiency climbed to 4 percent at first and then went to 11 percent in a short period of time. That was enough for some electronic devices to be charged with power generated from the sun, which was a huge step.

Given that the efficiency level of solar cells grew over time, it’s no surprise solar panels ended up being a part of the space program. That drastically increased their production and reduced the price of solar energy to $100 per watt. Later on, during the 1970s, one research established how to produce less expensive solar cells, and that lead to power generated from the sun cost only $20 per watt.

At this very moment, the price of this clean and renewable energy is the lowest ever – around $0.5 per watt, and the efficiency of solar panels for home usage is around 17 percent. You may not find that to sound so great, but believe us, it is, and it made such a huge difference in so many ways.

We have explained to you now the very history of solar technology. We made sure you understand that the usage of the sun’s power is not something we recently discovered since people relied on the sun rays from the beginning of time. But it is clear that the modern history of solar panels began many years later and that it has experienced full development in the last couple of decades.

Thanks to so many scientists and engineers, we are now able to actually reduce our electricity bills and to contribute to saving our planet from fossil fuels. The fact is, the cost of solar panels dropped by around 10 percent each year, starting from 19802. And experts believe this is not the end of that trend. They claim solar technology will be available to every single person in the world in the near future.