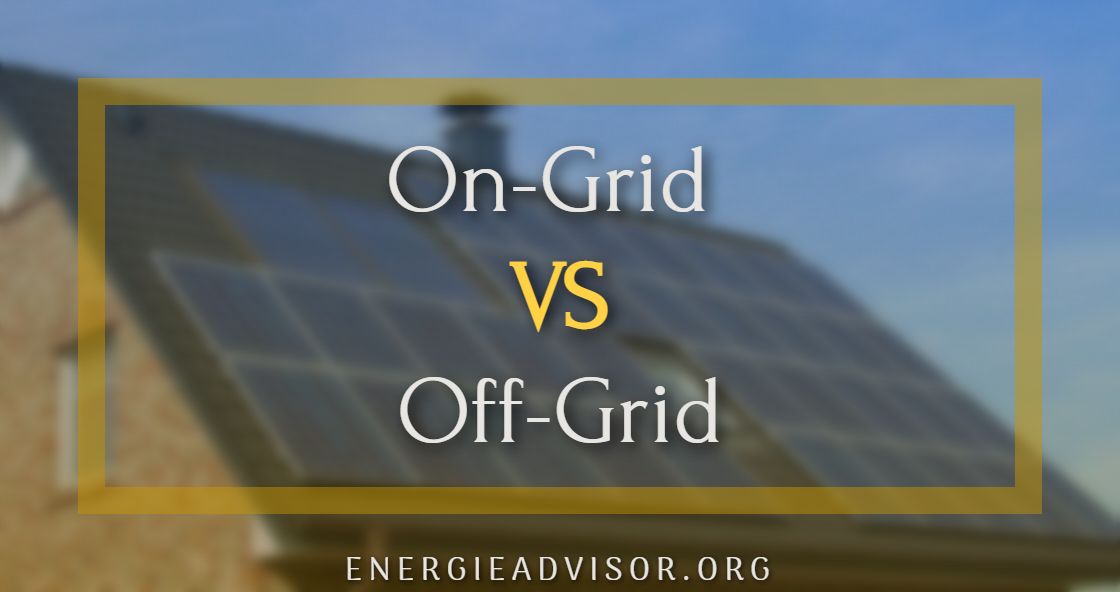 There is no doubt that going solar was the right decision for you. The benefits of relying on the power of the sun are numerous, and they will bring a lot of satisfaction to your life.

Now, before you install the whole construction, you need to decide whether you are going for an on-grid or an off-grid solar power system. We are here to point out all the differences between these two in order to help you choose the right one.

You should know that every solar-powered system works the same way. First, solar panels generate sunlight and transform it into DC power. Then, that power goes through a solar inverter that changes it to AC power.

You can choose whether you want to use that power immediately for your home appliances or to store it in the battery. That’s an off-grid solar system, and it means that you are relying solely on the power of the sun.

The on-grid technology implies basing your electricity consumption on what your solar panels produced, but being connected to the grid as well and pulling out some of the regular electricity from it in case you need more. Now, here are the four main differences between the on-grid solar system and an off-grid one.

When it comes to the off-grid power system, you are entirely reliant on the power of the sun. That means that you won’t have any access to the electricity, and your home appliances will work only if the solar panel installation provided enough capacity.

In this case, you need to have a solar storage device like a solar battery where the power will be kept for those occasions when the system is not working, like during the nighttime.

Also, when it’s cloudy outside, you will have less or no electricity, so your appliances may not work, or at least all of them. That’s one of the biggest disadvantages of this type of solar system. All you can count on is what you’re producing and how much electricity you have stored.

The on-grid solar system will provide you with electricity no matter what. Even in situations when your solar panels are not converting enough power, or if you don’t have anything stored in batteries.

You can simply pull some electricity from the utility grid in order to complement your needs. That way, your heat will always be on, and all of your machines will be working. The only problem you may face is when the power goes down.

Solar panel systems are designed to bring enough energy to your household for it to work normally. The experts who are doing the assessment will determine how big and how strong the installation you need.

But these numbers cannot be super precise, and there will be days when you will create more electricity than you actually need. Now, the question is, what happens in that case, where this excess electricity goes? In the case of an off-grid solar power system, that energy will go straight to the solar battery.

It will be stored there until you need to use it – when the system is not producing energy, which means during the night or cloudy weather. These systems are actually designed to produce some extra electricity for those situations.

Most off-grid installations are designed to provide you with non-stop power. But since the weather is unpredictable, it may happen you don’t have enough energy all the time.

When it comes to on-grid systems, the chances of that happening are zero. We established that you will always have enough power by taking some from the utility grid if you need it, but the question is – where the surplus goes? The answer is – into the grid.

You can choose to deliver everything your solar installation converted, and you don’t actually need to the public utility grid for which you will be compensated through net metering. That means that you will get credits from the utility company so that when you need to pull out some of it for your home needs, you won’t be charged for that certain amount based on those credits.

3. What if the Grid Goes Down?

If you are off the grid, your solar panels will be producing electricity no matter what, only if there’s enough sunlight coming from the sky. So in case there’s a power outage out there, you won’t even know. Your system will be working independently from the public utility grid, and you won’t be disturbed by the fact the whole electrical system went down.

But when it comes to on-grid households, the story is completely different. People who chose to have full access to the grid and to take some of the electricity whenever they need it will be in a problem in case of a power outage.

They won’t have electricity at all unless they are proud owners of a grid-tied system that includes battery storage. The system is designed that way in order to protect the safety of utility workers who need to fix the power line.

The things are very simple here – if you are not connected to the grid, and you have an off-grid installation on top of your roof, you won’t be served with an electricity bill because there’s no way you could spend any of the utility electrical power.

However, the on-grid households will have some charges each month, at least the minimal ones, even if their system provided them with 100 percent of electricity. One of them is the delivery charge or service fee, which is actually the cost you need to pay for connecting your system to the grid.

Usually, it is a flat rate, and it won’t change no matter how much electricity you are pulling from the grid. The other type of charge is the demand charge, which is most commonly tied only to commercial properties, and it’s based on the increased electric rate for the power you used during the peak demand period.

This period is a short time frame during which your business uses the most electricity.  Now, if that period is during the day, you can lower your costs by simply relying more on your solar system, but if it’s during the night, and your demand charges are really high, you can think about investing in a solar battery and drawing the energy from it.

As you can see, there are some advantages and some disadvantages to both on-grid and off-grid solar power systems. With the first one, you will never have to worry about running out of electricity, but you will also never experience that sort of freedom off-grid construction can offer you.

With an on-grid system, you will be able to lower the expenses and even save some money, while off-grid ones are pretty expensive to start with, given they need storage batteries and some other investments. In the end, it is a matter of personal preferences which one you will choose as a solution for your home or your business.