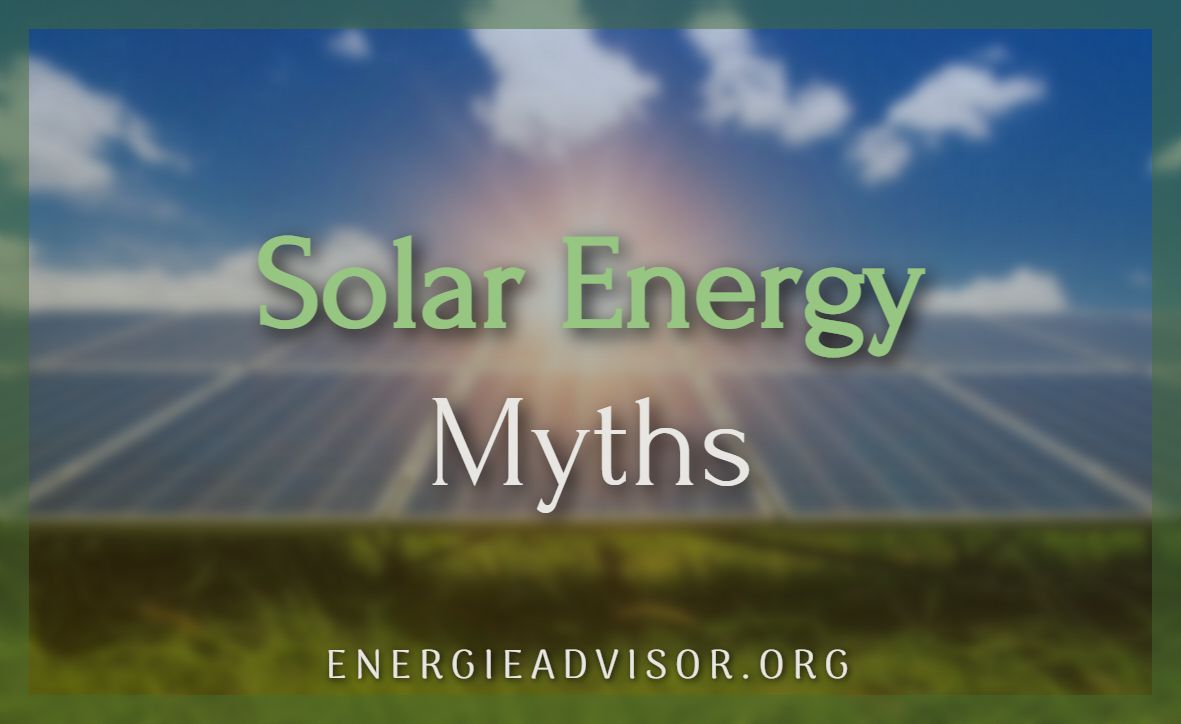 No matter how technologically progressive our society is, it seems like our minds are sometimes too close and unable to keep up with all the novelties. Although solar energy is proven to have so many advantages, both for our pocket and the well-being of the planet, there is still too much resistance and too many solar energy myths.

In order to change that outcome, as well as the perception in your mind, we present you with the top 10 erroneous conclusions and simple truths that lie behind them.

Myth 1: Solar Panels Are Too Expensive

This might have been the truth 10 years ago, but today solar panels are affordable and within an optimum price range for an average householder. On the other hand, you should really see it as an investment because with solar panels as the leading energy supplier, you can save from $100 to $200 each month on your electric bill.

Most times, the decision to implement solar energy in your home will pay for itself in six to 15 years, but combined with state and federal tax credits, as well as different incentives, you will likely reach that goal in two to four years.

Myth 2: Solar Panels Do Not Work in Cold Weather

Now, this is nonsense! Solar panels work no matter if it’s sunny, cloudy, or cold outside. New technologies made it possible for them to be effective in continuity, no matter the circumstances like the weather. As a matter of fact, they are more productive on colder days than on warmer ones.

If you think about it, it makes sense, given that Germany, a country that receives around the same amount of sunshine as Alaska, is currently considered to be a solar superpower.

Finally, the most important thing to remember is that solar panels have the ability to produce electricity from indirect light.

First of all, it won’t be you who will do the work. You should think about contracting a reliable manufacturer who knows what he’s doing. The process itself isn’t as complicated as you think, especially if the system is connected to your utility grid, which is quite a common thing.

Sure, if you are a handyman yourself and you have enough skills, it’s possible to do the install solar panels on your own, but we recommend you ask for the help of a professional, just in case anything goes wrong or turns out to be a bit trickier than you thought it would be.

To make sure it’s providing you with the maximum solar panel efficiency, all you have to do is to give your home solar system a „bath” while using only water and a sponge, once or twice a year. It really cannot be easier than that. Solar panels are built in a way that allows them to withstand severe weather, including storms, sleet, and hail. They are sturdy, durable, and reliable.

So just make sure to remove any accumulated filth or snow that has been lying on top of them, and to have a recommended annual inspection in order to prevent any bad outcome. However, you should know that a battery-based system needs more often cleaning than the one without it.

This is another thing that simply isn’t true. Solar panels won’t do any damage to your house. If anything, they can be thought of as a shield that may extend the life of your roof by protecting it from the different weather elements.

Given their lightweight panels won’t make any dents at the construction, which is another misleading claim, but if needed, they can be easily detached and removed. The holes must be made in order to fasten panels to the roof, but well-known and qualified companies in charge of installation are usually using flashed mounts to waterproof roof penetrations.

Myth 6: Solar Energy Is Not Viable

The International Energy Agency made a statement five years ago that, within the decade, solar energy is going to become a viable alternative to fossil fuels – ahead of coal, hydro, and nuclear. As it turns out, they were right.

Why? The world is finally becoming aware of all the benefits solar energy brings along, as well as the fact that it doesn’t cost us a thing, except the fact we have to install the system that supports it. Above all, the same Agency is predicting that by 2050, solar power will be the world’s largest source of electricity.

Myth 7: Solar Energy Can Power My Home When the Electricity Goes Out

Solar panels are not a type of external power generator, they are connected to a grid, so if the power for some reason goes out, you too will be in the dark, regardless of the solar power system. Therefore, solar panels cannot serve you as a backup plan when AC electricity stops working to maintain the most important house appliances until the power is back on.

Sure, there is an option to install a battery system, but it’s a question if its worthy of the cost at this moment. Technology has not caught up enough to provide a good cost-to-benefit ratio regarding this matter.

Myth 8: It’s Hard to Get Permissions for Installing Solar Panels

It’s not hard, it’s part of the bureaucracy, and it will probably take some time, but it’s not a thing you should be worried about when planning this step. After all, it’s not like you are buying a TV, this is a huge infrastructural venture, and those things take some time.

First, you have to consult the city on the regulatory codes that govern such actions, submit the plan, and ask for permission.

The residential request takes less time to be processed than the commercial one and will cost you some, but you already knew that. The fact is that solar energy companies can probably take care of most of those things.

Myth 9: Solar Panels Decrease the Value of Your Home

Recent studies showed that people in search of a house are willing to pay much more, up to $15.000 over the price of a regular place, for a home with solar panels placed on its roof. So it’s definitely the opposite, the fact you have a solar household will increase its price on the market.

Some states even don’t count solar energy systems toward the value of your home when calculating property taxes, imagine that! But, you have to keep in mind that the geographic places of the property, as well as the size and the quality of your solar installations, will affect the final price too. Also, as a downside, it may take longer to sell a solar house than the regular one.

Myth 10: Solar Panels Are Not “green” Enough, and They Are Bad for the Environment After They Are Used Up

First of all, there isn’t a power generation method that’s perfect and without faults, but reliable data shows that even though the emissions of solar panels exit, it’s far less than the one relating to coal or natural gas energy.

Even if taking the energy needed for manufacturing solar panels into the equation, the overall emission is still three to 10 times less than the one from traditional fossil fuels. And regarding the environment, solar panels are built to last for about 25 years (the number depends on the manufacturer), after which they can be recycled.

HONEST ADVICE: Don’t believe everything you hear, try to become more open to thriving options and possibilities, and make sure to fully understand the topic with all the pros and cons before creating an opinion about things as important as this one most certainly is.