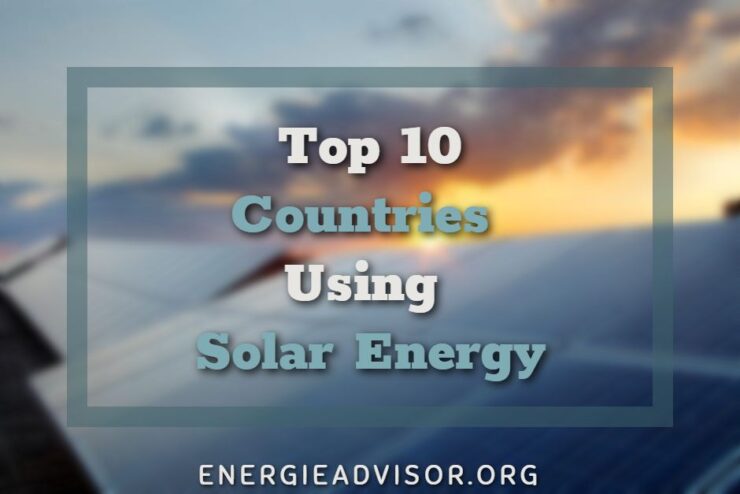 As you already know, most of the world still relies on natural gas, oil, and coil for energy. However, some countries are quite interested in investing in renewable power. These nations fund large projects and encourage their citizens to produce energy by using solar panels. So, where is solar energy used?

As it turns out, the U.S. could learn a thing or two from countries like China, Germany, and Japan. These and other nations prove that solar power is a valid answer to a global search for alternatives to conventional fuels.

In this article, we analyze the efforts of the top ten countries that use solar energy and profit from using sunlight-induced energy on a national scale.

Situated on the southern half of the Korean Peninsula, South Korea has huge plans when it comes to energy converted from sunlight.

The government plans to add 30 GW (gigawatts) of photovoltaic power use in the next ten years. The Moon Jae-in administration calls this plan “Renewable Energy 2030” – it is their answer to the public’s demand for safer and cleaner energy.

Once we take into account the country’s well-developed energy sector and strong economy, it’s no wonder that solar power took off in France. Driven primarily by large-scale installations, the country’s market grew close to 60% in the first half of the last year.

In 2016, François Hollande (the President of France) and Narendra Modi (the Prime Minister of India) founded the International Solar Alliance. The alliance’s main objective is to reduce the world’s dependence on fossil fuels.

When ranking solar power by country, it’s impossible not to mention Australia. The country’s solar presence has snowballed in the last ten years, with more than two million installations as of September 2019.

However, many people argue that the nation could do much more – nearly all areas of Australia enjoy high sunshine hours. Fortunately, the government plans to fund new plants and increase production in the following years.

In terms of installed capacity, the United Kingdom has finally managed to overtake Spain and France. Government initiatives encouraging homes, businesses, and schools to use solar panels have successfully assisted in establishing the UK as one of the continent’s leading sunlight-power producers.

In 2016, sunlight power accounted for 3.1% of the UK’s whole electricity generation. In 2017, this number rose to 3.4%. The country is on a slow but steady path of decreasing dependence on conventional fuels.

Over the last decade, Italy’s reliance on solar power generation has increased dramatically. Between 2009 and 2013, Italy saw a 15-fold increase in installed PV capacity, overtaking the U.S., Japan, and China at the time.

However, the government’s tax breaks offered to solar farms have expired since then. This caused many sunlight powers farms to be closed or sold. Nevertheless, Italy still stands as one of Europe’s leading countries when it comes to harnessing the sun’s energy.

Getting into the solar game at the beginning of this decade, India is predicted to greatly increase its production by 2020. With India being a developing country, this energy plays a crucial role in purifying and heating water in many of its regions.

The Government of India, led by Narendra Modi, plans to increase the installed capacity to 100 GW in the next two years.

The United States has had a long history of using sunlight-induced energy. Since the initiation of the SEGS Thermal Plant in 1983, the country has produced more than 17 million megawatt-hours.

The United States steadily improves its status as a solar power leader – almost $20 billion were invested in the solar industry in 2014 alone. The country is home to both advanced domestic capabilities and large installations.

The Land of the Rising Sun has been one of the renewable power leaders ever since the 1990s. As well as being at the forefront of power generation, Japan is also one of the biggest manufacturers of technologies required for solar panels.

For the last couple of years, the Government of Japan has had sunlight power as one of its priorities. They’ve made panels more attractive and affordable to citizens by subsiding solar installation costs.

When it comes to European countries that use solar energy, Germany is the clear champion. Although relatively small when compared to nations such as the US or Australia, Germany has been one of the planet’s top sunlight power generators for years.

More than 120,000 of Germany’s households have solar units, and there are more than 30 important PV generation plants spread over the country. Germany plans to use nothing but renewable energy by 2050.

Among the world’s continents, Asia is the heaviest investor in solar power. As you can already guess, the top spot goes to China. Surpassing Germany in 2015, China is now also the world’s leader for PV usage, having 174 GW of installed capacity.

What’s more, the country’s energy providers are going into space – they’re planning to put a solar power station some 22,000 miles above the earth. Pretty impressive, wouldn’t you say?